Terminology and Aspects of Differentiation 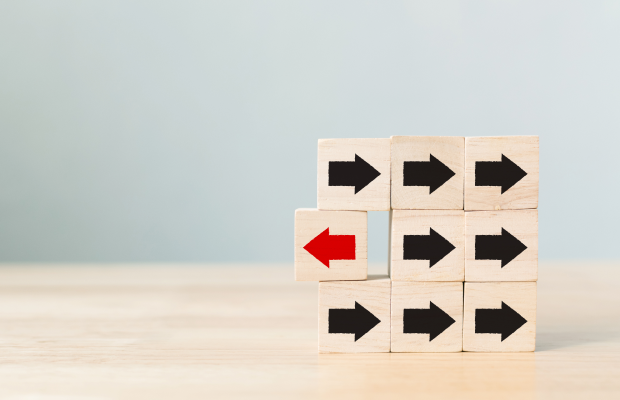 Bowen theory is a theory about human relationship functioning (Bowen, 359). An important but difficult-to-define concept in the theory is differentiation of self. Different terms are used in Bowen’s writings to touch on this concept. This paper is an attempt to describe how Bowen used words related to the concept including the following terms: differentiation, the scale of differentiation, basic self, solid self, pseudo self, self, no self, and functional self. The term differentiation is a noun but is also used as an action word: differentiating move; more differentiated, etc.

Individuals with higher levels of differentiation are better able to regulate their emotions, be more objective, and demonstrate more flexibility in their behavior. They are more able to operate on their thinking versus dependency on others. Those with more fusion (thinking is influenced more by the group than by self) have less flexibility when faced with a challenge and actions are more determined by the group. Dr. Michael Kerr, who is a psychiatrist and the President of Bowen Theory Academy, describes differentiation of self as “emotional objectivity with action…”

“The concept defines people according to the degree of fusion, or differentiation, between emotional and intellectual functioning. This characteristic is so universal it can be used as a way of categorizing all people on a single continuum. At the low extreme are those whose emotions and intellect are so fused that their lives are dominated by the automatic emotional system. Whatever intellect they have is dominated by the emotional system. These are the people who are less flexible, less adaptable, and more emotionally dependent on those about them. They are easily stressed in dysfunction, and it is difficult for them to recover from dysfunction. They inherit a high percentage of all human problems. At the other extreme are those who are more differentiated. It is impossible for there to be more than relative separation between emotional and intellectual functioning, but those whose intellectual functioning, can retain relative autonomy in periods of stress are more flexible, more adaptable, and more independent of the emotionality about them.” (Bowen, 362)

“…the differentiation of self, to denote ways that each person is basically different from others…. (Bowen, Kerr & Bowen, 346)

“The scale is an effort to classify all levels of human functioning from the lowest possible levels to the highest potential level, on a single dimension. In broad terms it would be similar to an emotional maturity scale, but it deals with factors that are different from “maturity” concepts.”…… “The scale has no direct correlation with intelligence or socioeconomic levels”. (Bowen, 472)

“The differentiation of self scale is an effort to assess the basic level of self in a person.” (Bowen, 473)

“….With all the variables, it is possible to do a reasonably accurate estimate of wi degree of differentiation of self from the fusion patterns in past generations and from the over-all course of a life in the present.” (Bowen, 306)

“Clinically I make estimates from the average functional level of self as it operates though periods of stress and calm.” (Bowen, 371)

The use of the term “basic self” is described by Bowen as similar to the term “solid self”. “Basic self” may not change easily, but the ability to know the difference between emotional and intellectual functioning can help the person take action that could increase basic self.

“The basic self is not negotiable in the relationship system in that it is not changed by coercion or pressure, or to gain approval, or enhance one’s stand with others.” (Bowen, 473)

“The basic self is may be changed from within self on the basis of new knowledge and experience. The basic self is not negotiable in the relationship system in that it is not changed by coercion or pressure, or to gain approval, or enhance one’ stand with others. There is another fluid, shifting level of self, which I call the “pseudo-self,” which makes it difficult to assign fixed values to the basic self, and which is best understood with functional concepts.” (Bowen, 473)

“It is not possible ever to make more than minor changes in one’s basic level of self; but from clinical experience I can say it is possible to make slow changes….As I see it now, the critical stage is passed when the individual can begin to know the difference between emotional functioning and intellectual functioning, and when he has developed ways for using the knowledge for solving future problems in a lifelong effort of his own…” (Bowen, 371)

Solid self refers to the part of self that does not change in relation to others and stands in contrast to pseudo self.

“The solid self does not participate in the fusion phenomenon. The solid self says, “This is who I am, what I believe, what I stand for, and what I will do or will not do,” in a given situation. The solid self is made up of clearly defined beliefs, opinions, convictions, and life principles.” (Bowen, 365)

Pseudo-self is a pretend self that functions in relationships in response to approval from others. It is the part of self that fuses with others and can be decreased or increased by a relationship process.

“The basic self is may be changed from within self on the basis of new knowledge and experience. The basic self is not negotiable in the relationship system in that it is not changed by coercion or pressure, or to gain approval, or enhance one’ stand with others. There is another fluid, shifting level of self, which I call the “pseudo- self,” which makes it difficult to assign fixed values to the basic self, and which is best understood with functional concepts.” (Bowen, 473)

“It is the pseudo-self that fuses with others in an intense emotional field.” (Bowen, 473)

“Self” refers to the ability of a person to hold their own thinking and maintain independent functioning in relationships. For example, “I try to be a self in my marriage.” The more “no-self” or the more one person fuses with another and the less one is able to think for self, the lower the person’s level of differentiation.

“The level of differentiation is the degree to which one self fuses or merges into another self in a close emotional relationship.” (Bowen, FTCP, 200)

“Many life experiences automatically raise or lower the functioning levels of self, but the shift can be as easily lost as gained.” (Bowen, 203)

“It is the pseudo-self that is involved in the emotional fusion with others with the loss or gain in “functional” self in the transaction.” (Bowen, 407)

“The term defining a self or working toward individuation are essentially synonymous with differentiation.” (Bowen, 539)

“From experience I had learned that the effort to define or differentiate a self is most effective if one is “outside” the emotional system, or before on becomes fused into the system.” (Bowen, 493)

In the effort to understand what Bowen said in his writings, I misinterpreted some of the terminology in the theory. For example, I think I confused the term “basic self” with the phrase “basic level of differentiation”, which have different meanings. My interpretation of defining a self is not the same as differentiation. However, I do think that the effort to “define a self” is a step toward increasing the basic level of differentiation. I find the concept of differentiation hard to define, but I believe Bowen used the term to get at differences in the variation between individuals’ ability to think independently, in spite of togetherness forces, and to act maturely despite an immature reaction. Re-reading Bowen’s writings increased my understanding of how Bowen used the terms, and ways in which my thinking differs.